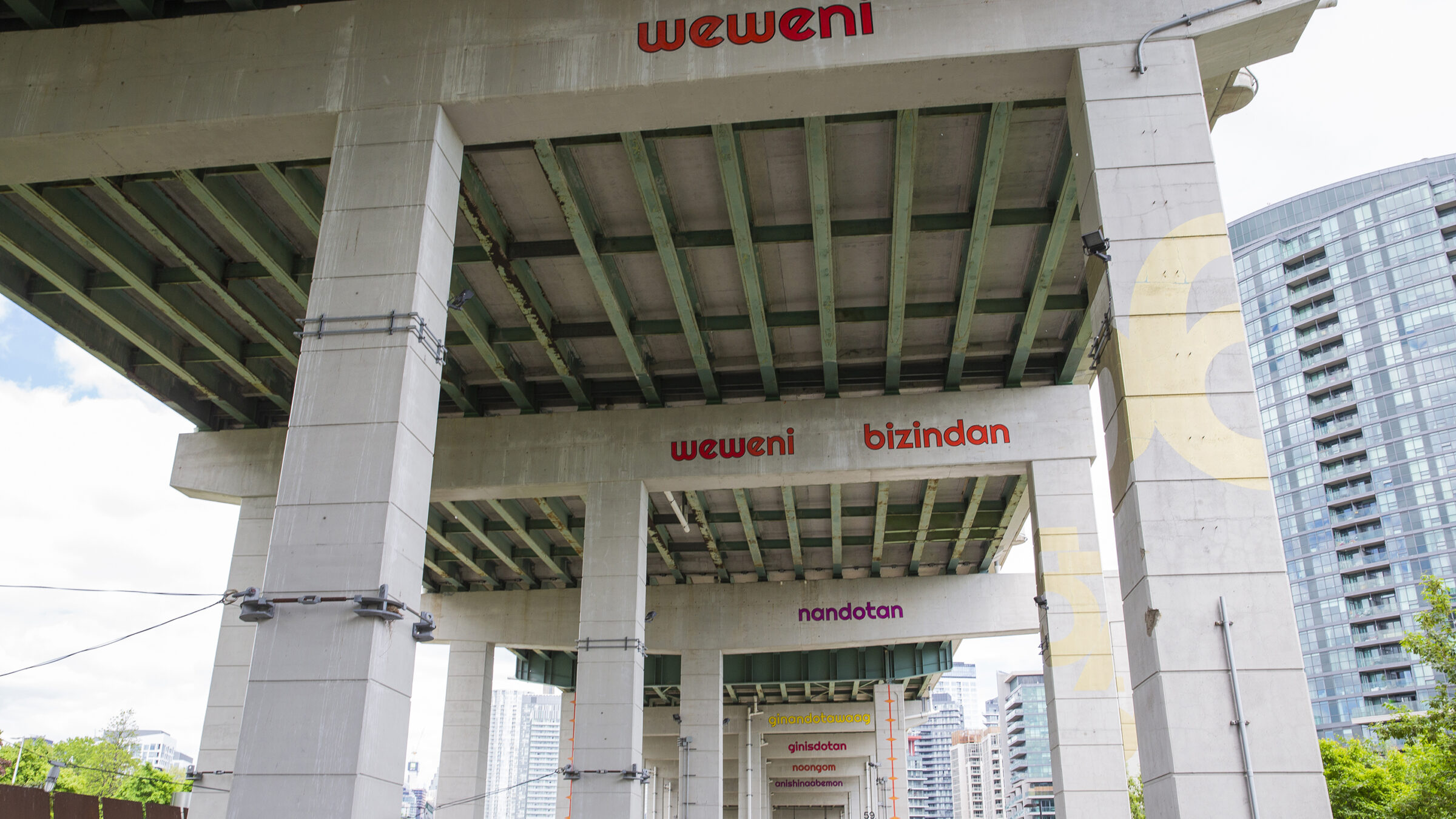 There is a tendency for the noun-dominant English language to perpetuate a view of the street as static, cold, necessary. Most objects in the English-speaking world are effectively dead. Certainly, that can be said of a highway. And, yet, for Anishinaabemowin – a verb-based language that ascribes spirit to rocks and trees among many other animate things – we might consider the built environment to be a relative.

What does it mean to be in relation to the street? To speak to, and through it?

Learning that the space of The Bentway speaks, and you can hear it if you listen closely (salt used in the concrete curing process long ago moving through the structure), pushes us to consider the Gardiner on new terms; what life exists here amid the traffic and the wind?

From ground-level, looking east or west, the Bentway resembles a canyon. We imagine the sounds of life echoing through time like the language itself, distorted slightly here, mispronounced there, bouncing back and re-forming like an echo. This is true of so many of the words and phrases in our language. As Anishinaabeg, we privilege mobility – our fluid movement through time and space – but sometimes we must also stop and listen carefully to hear the authentic. Perhaps this reflects the “living” nature of our language, written and reflected in concrete and salt.

Weweni Bizindan is a large-scale public art installation – a dialogue with the street –  that contributes to discussions of the animate nature of our language and the world around us. 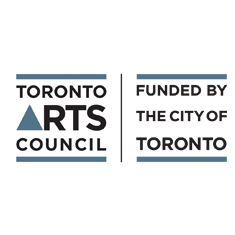 The Ogimaa Mikana Project is a language-arts collective that demands and activates the revitalization of the Anishinaabe language and life in the urban built environments of Anishinaabe aki. Through their social practice Susan Blight and Hayden King focus on the re-installation of Anishinaabe place-names throughout roads, highways, trails and paths in Toronto.

Susan Blight (Anishinaabe, Couchiching First Nation) is an interdisciplinary artist working with public art, site-specific intervention, photography, film and social practice. Her solo and collaborative work engages questions of personal and cultural identity and its relationship to space. Blight is co-founder of Ogimaa Mikana and a member of the Indigenous Routes artist collective. She is currently a PhD candidate in Social Justice Education at UofT, the Ontario Institute for Studies in Education (UofT), Delaney Chair in Indigenous Visual Culture at OCAD University, and an Assistant Professor in the Faculty of Arts & Science.

Hayden King (Anishinaabe, Beausoleil First Nation on Gchi’mnissing) is the executive director at Yellowhead Institute at X University in Toronto, Ontario. King has taught at McMaster and Carleton Universities as well as the First Nations Technical Institute, held senior fellowships at Massey College and the Conference Board of Canada, and served in senior advisory roles to provincial and First Nation governments and Inuit organizations. He is the co-founder of the language-arts collective Ogimaa Mikana Project and co-host of the Red Road Podcast. His writing, analysis and commentary on Indigenous politics and policy is published widely.