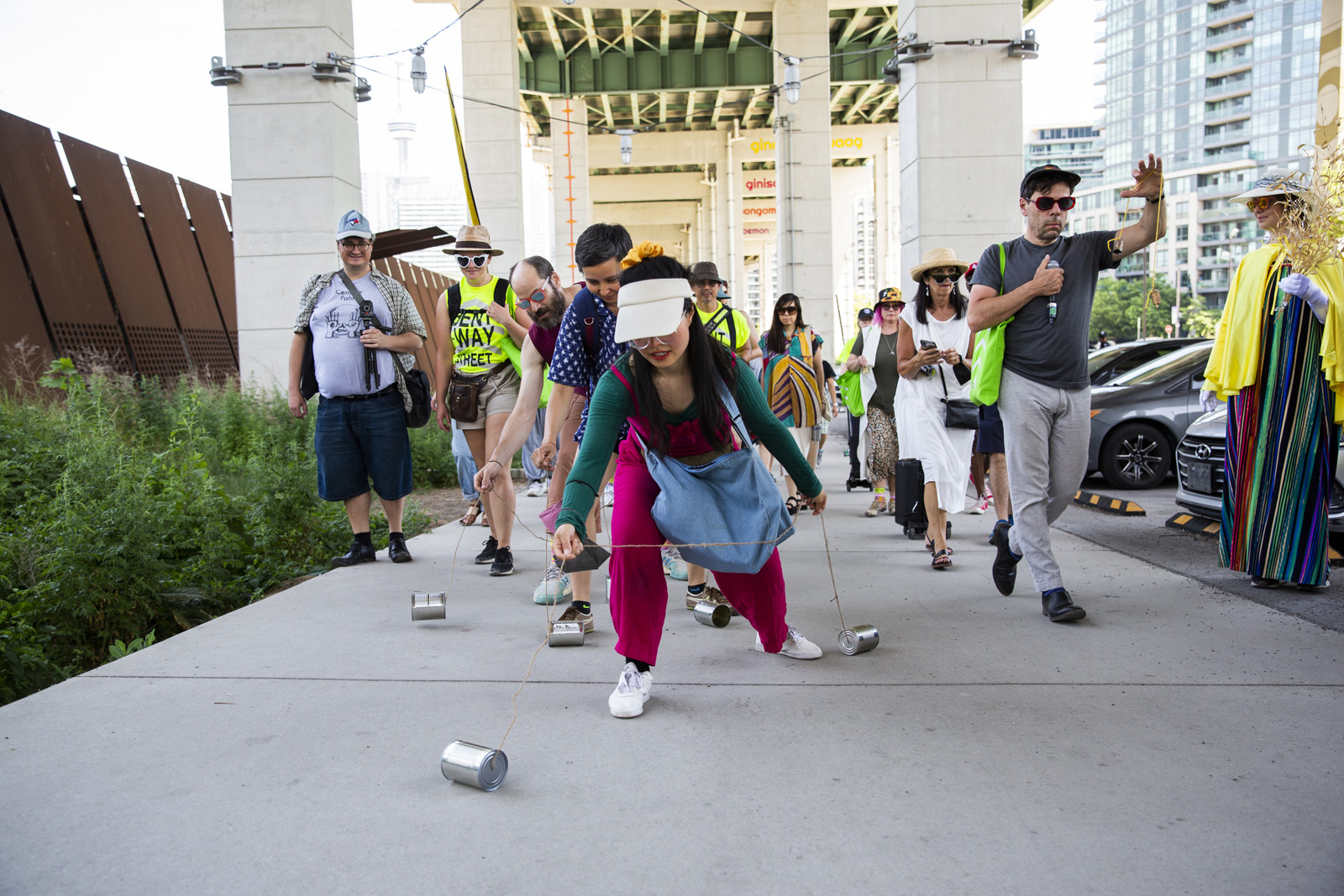 And With (as dreamed up by Germaine Liu) is a sound walk that invites audiences and passersby to experience the sounds and textures of The Bentway, the streets nearby, and the rumbling urban artery above like never before.

Join Germaine Liu and Mark Zurawinski, the Imaginary Percussion Ensemble, The Element Choir, and the mysterious leader of this procession who is known simply as “The Wizard”, on a sonic journey along the Gardiner corridor that explores The Bentway site, the streets of CityPlace, and The Bentway Studio at Canoe Landing.

Listen as a group of percussionists activates the voices of everyday structures, objects, and spaces by tapping into the physical potential of materials along the walk; the clang of metal, the crinkling of plastic, the hollow boom of concrete. Experience a choir of vocalists amplifying the soundscape of the street, echoing the roar of traffic, construction, and people who activate these spaces on a day-to-day basis. And With invites you to activate your listening and engage with the streets together in creative new ways.

Coexisting and travelling with the performers will be a mobile sound installation designed and curated by Zurawinski, featuring field recordings in and around The Bentway site. 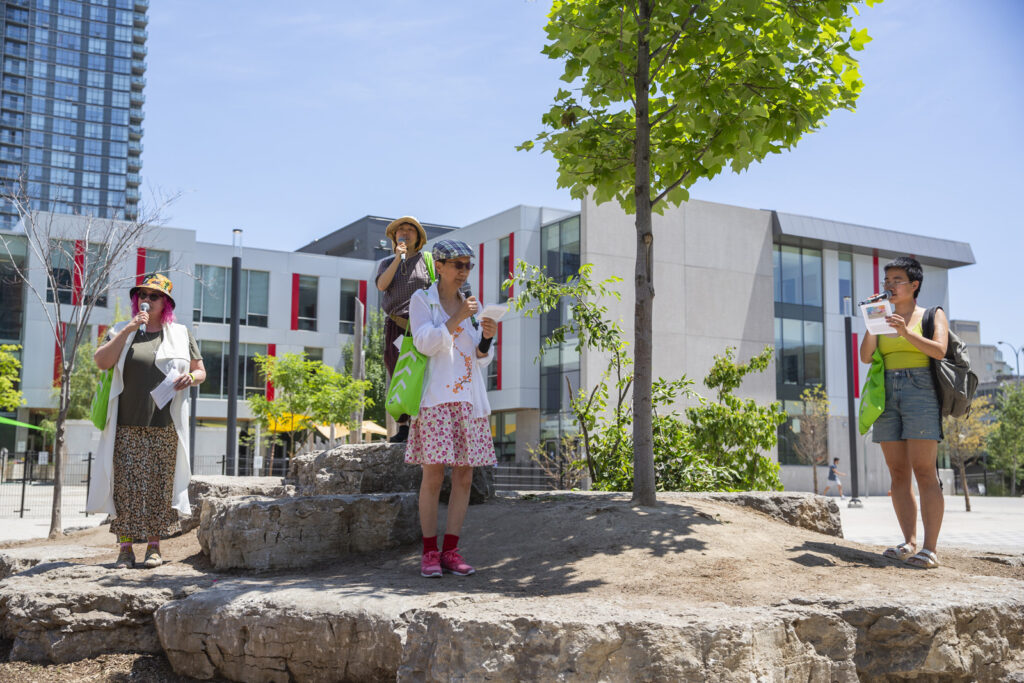 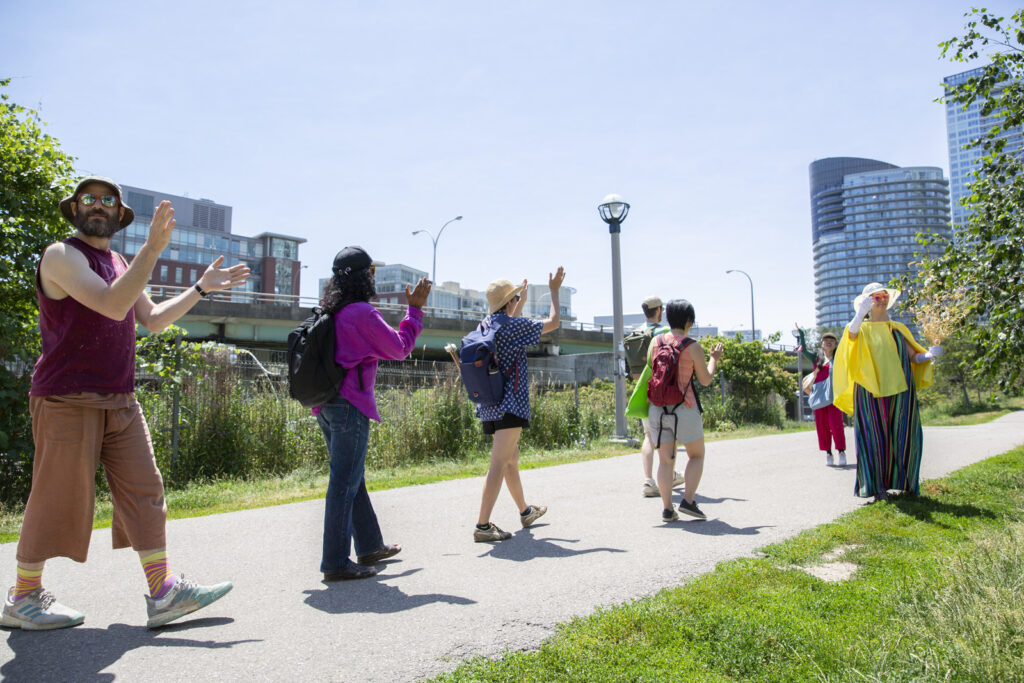 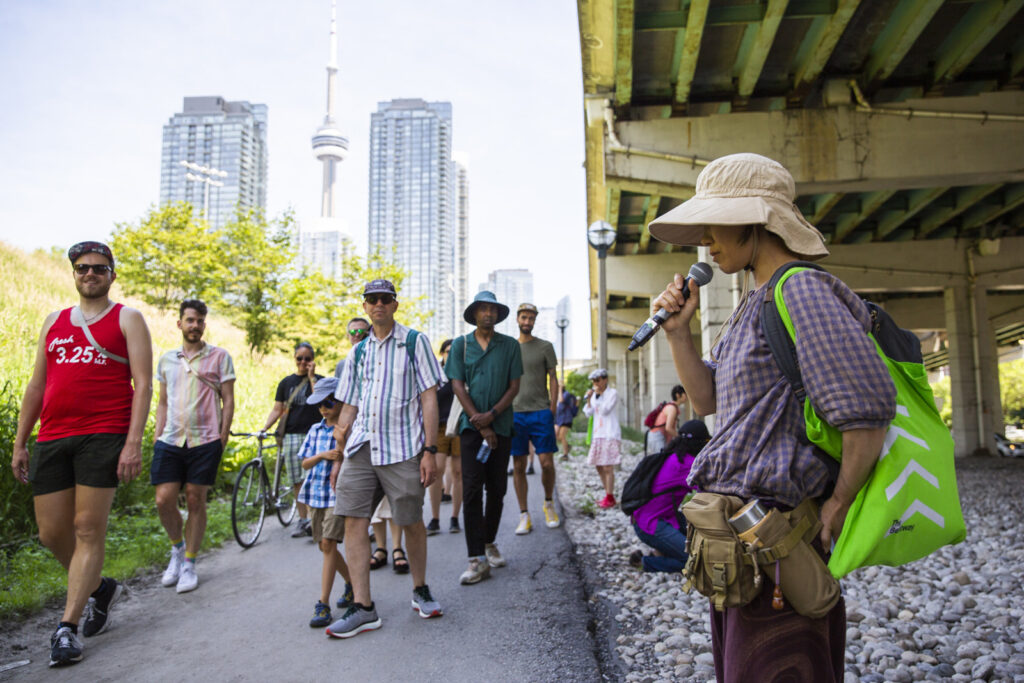 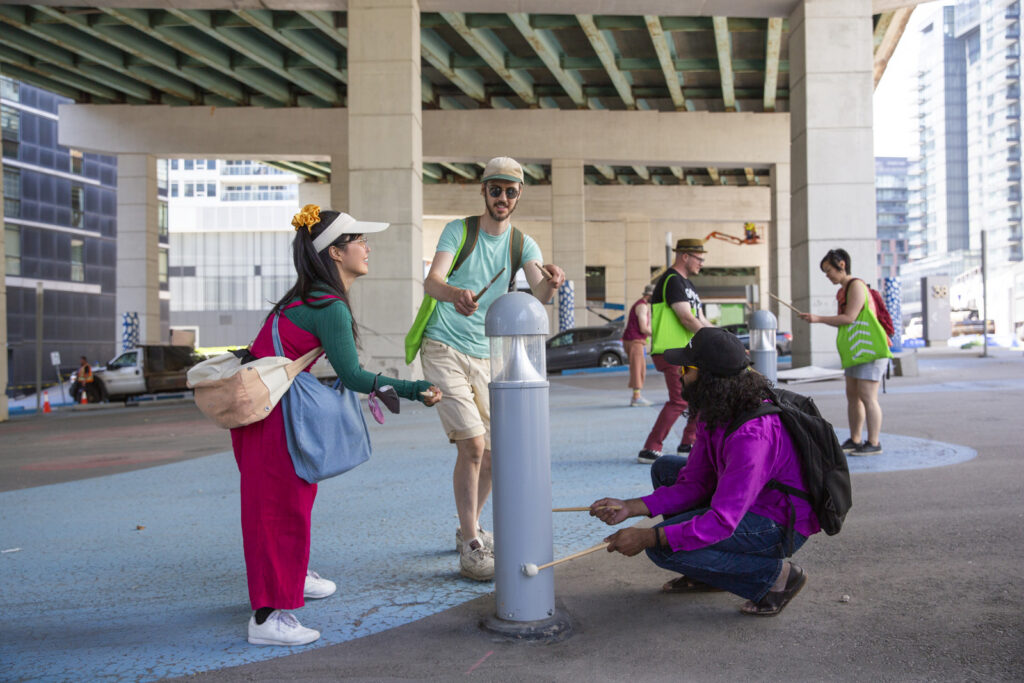 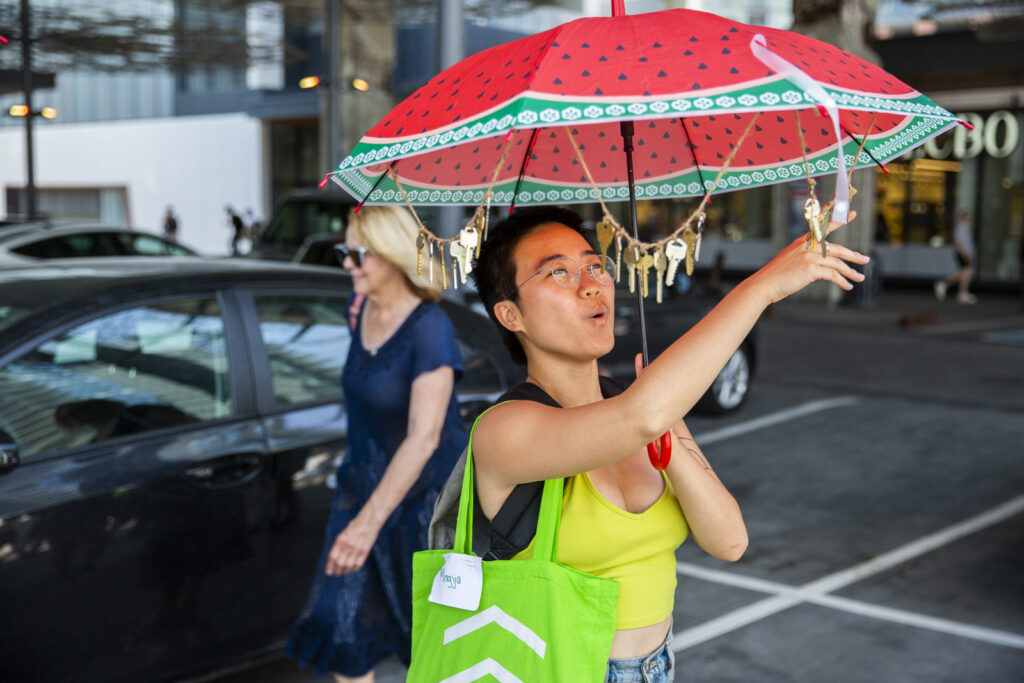 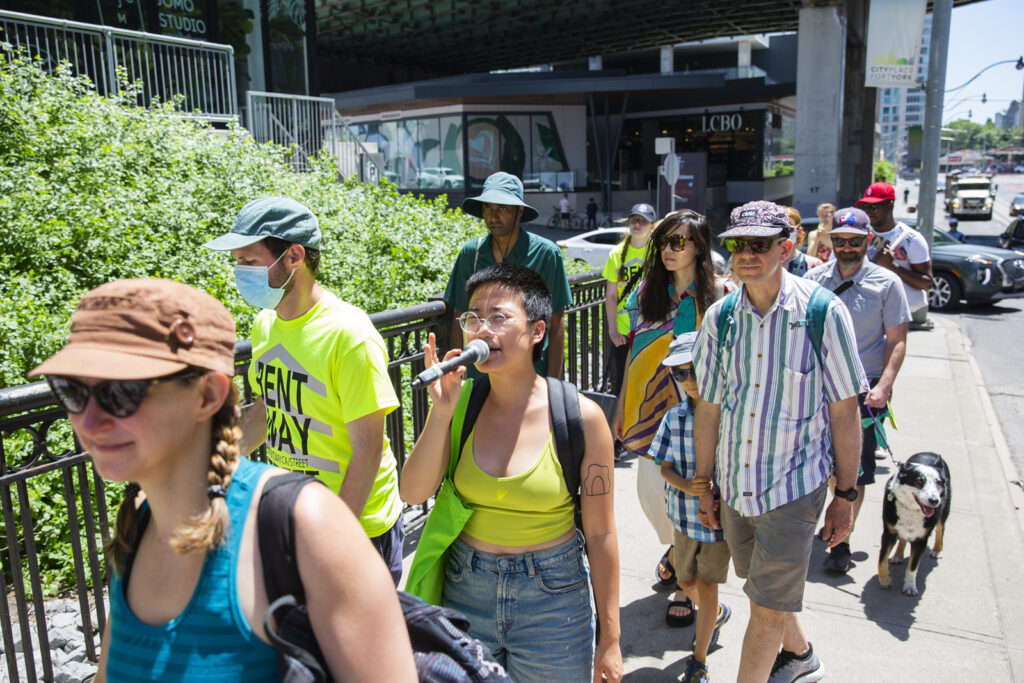 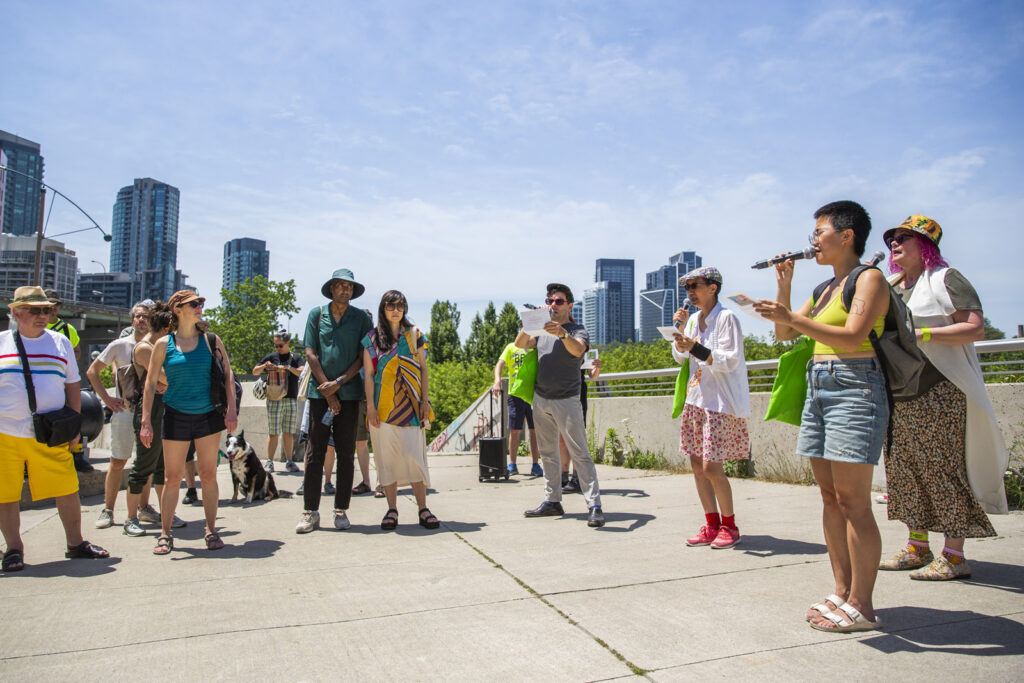 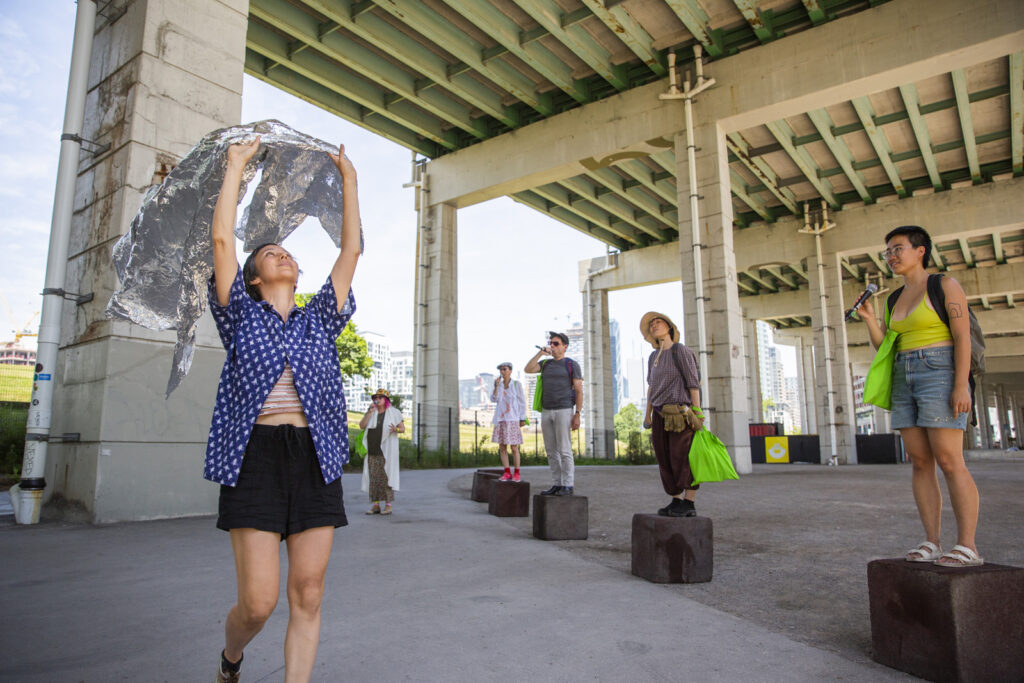 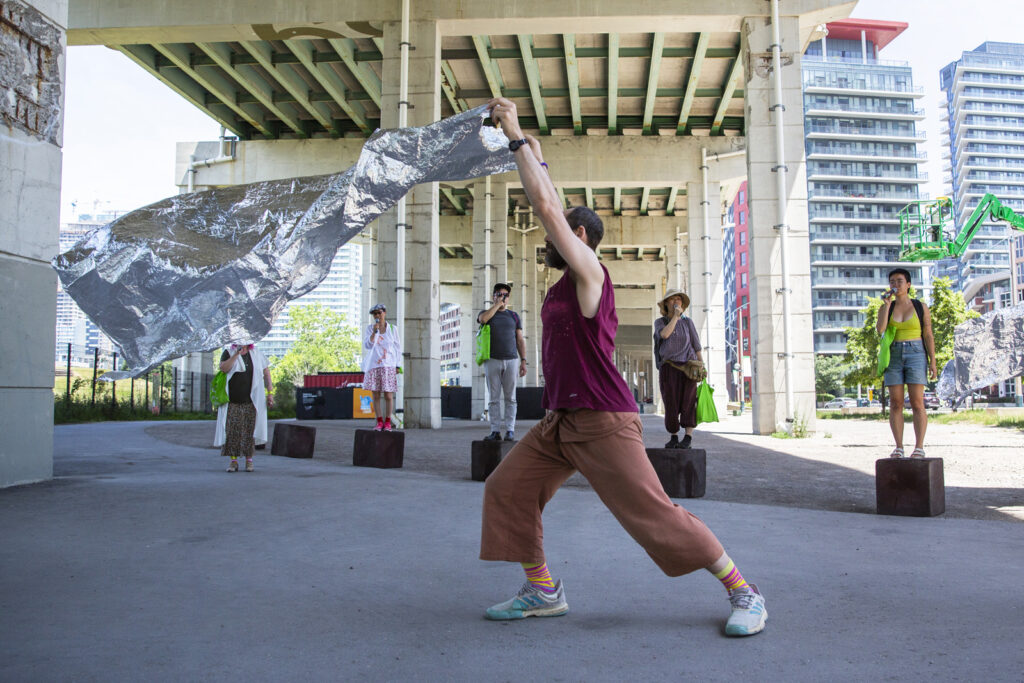 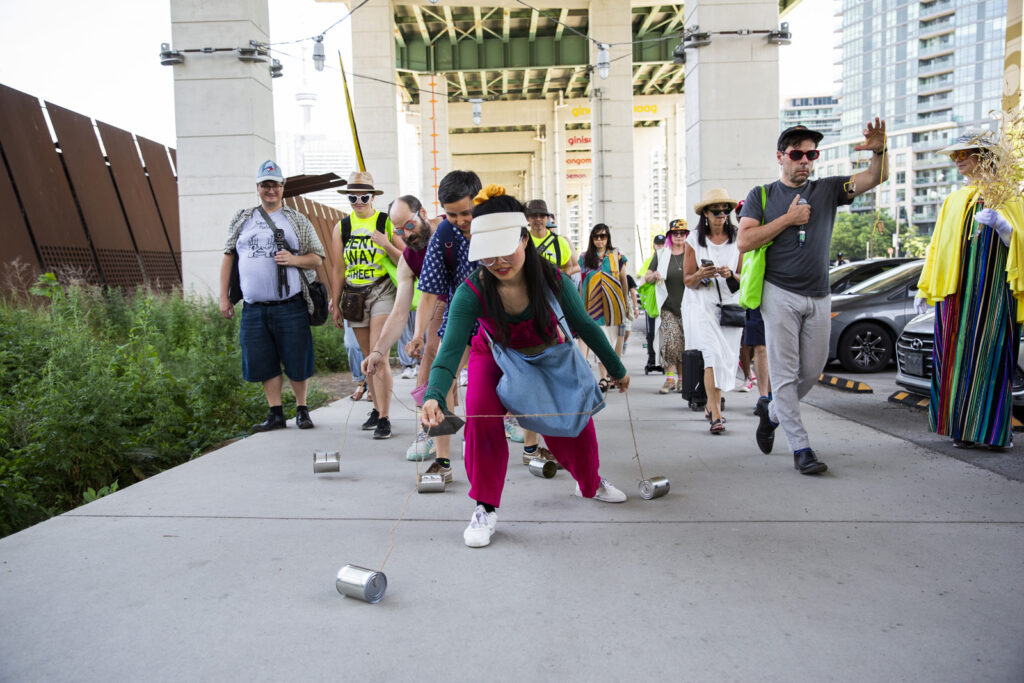 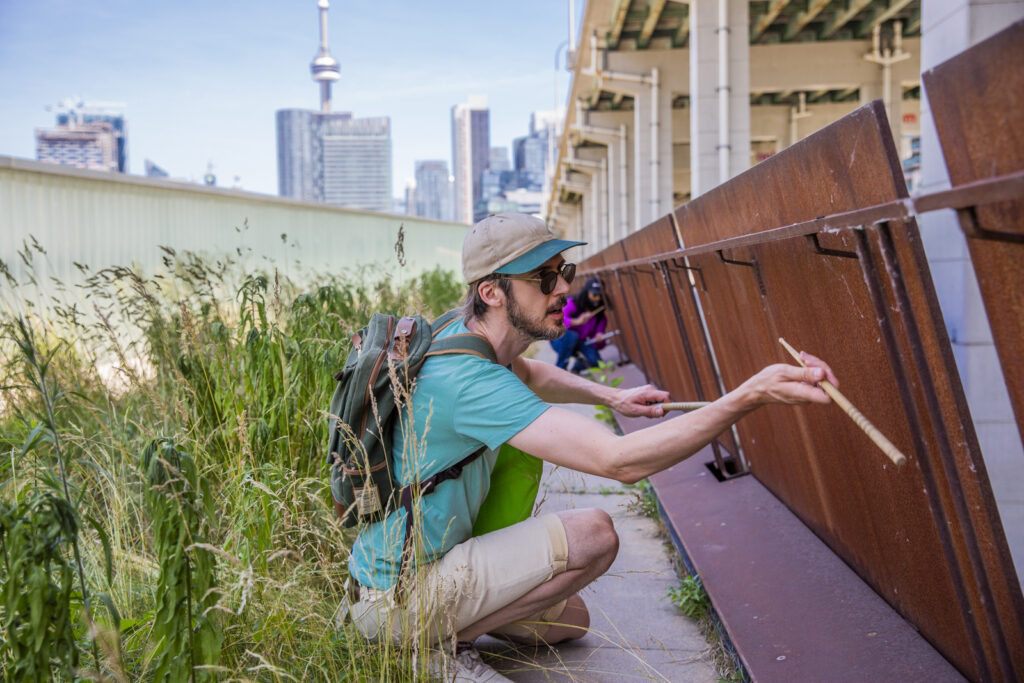 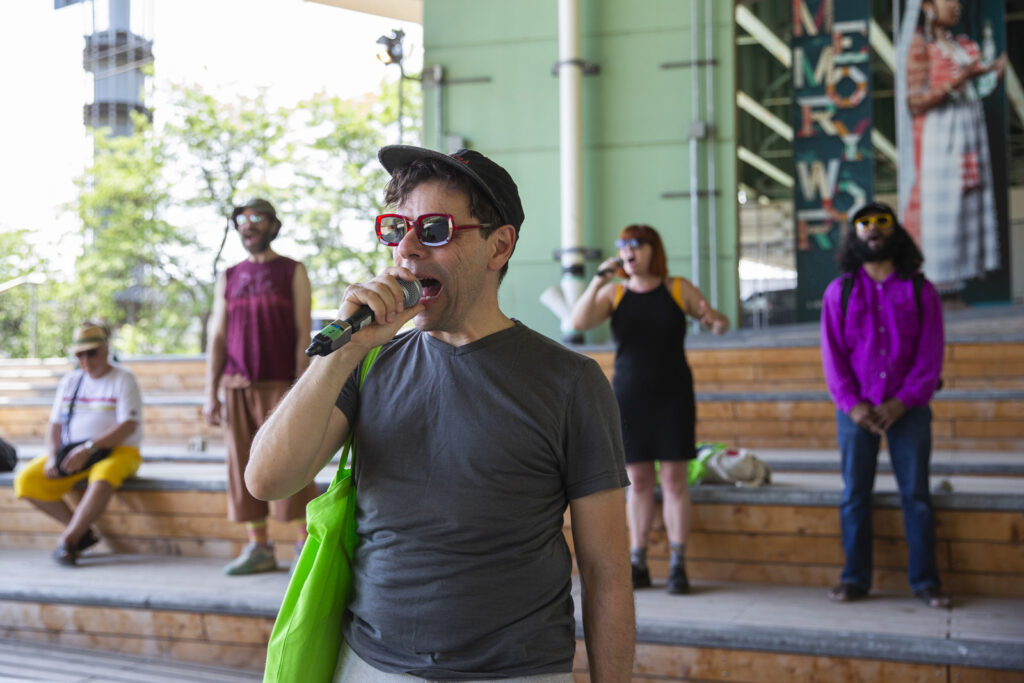 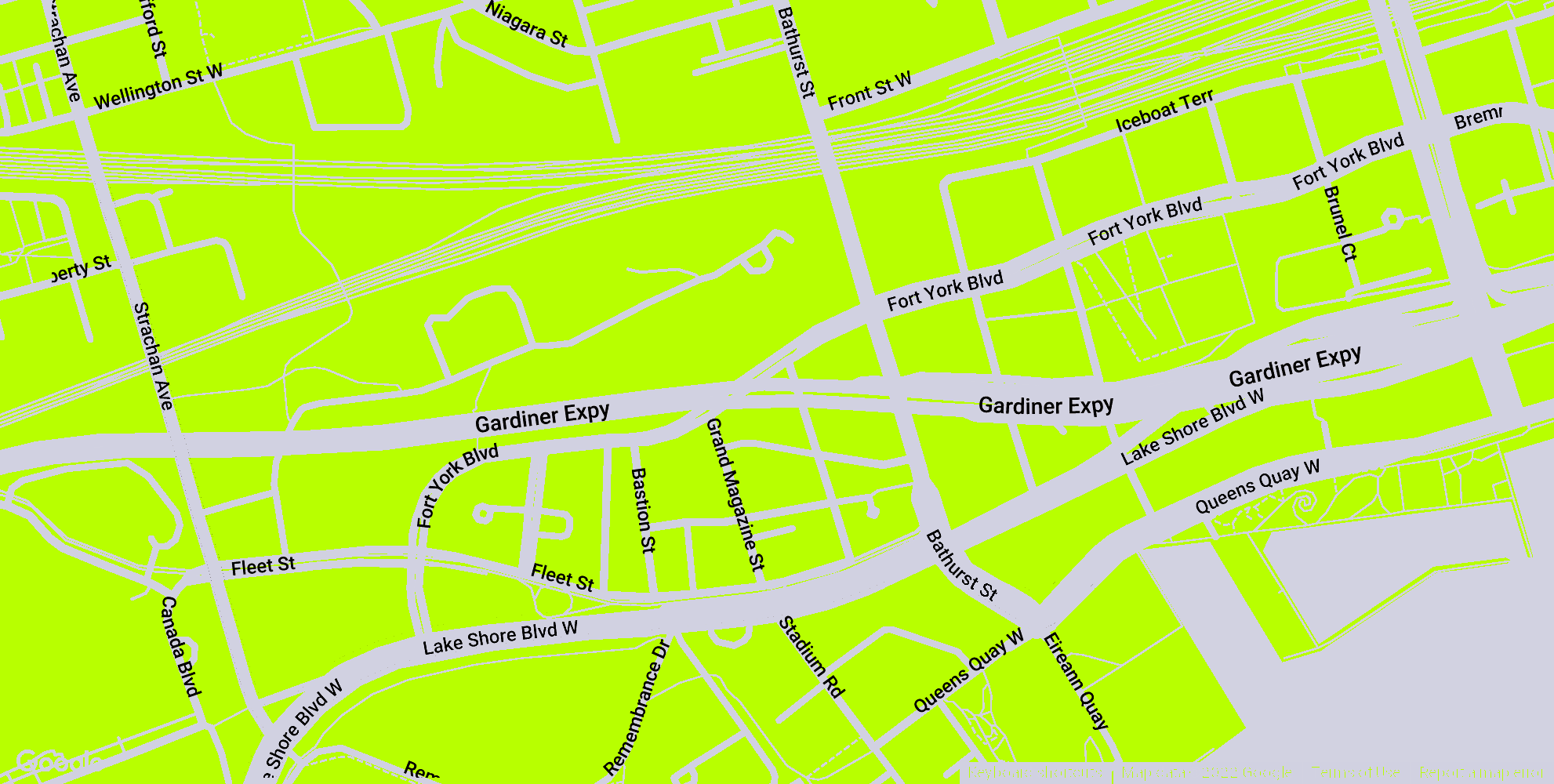 The theatre as an instrument. Hidden sounds from the nooks and crannies of the space brought to life – the clack of wooden seating, bass tones of metal railings, the squeal of scraped glass, accompanied by the roar of traffic. 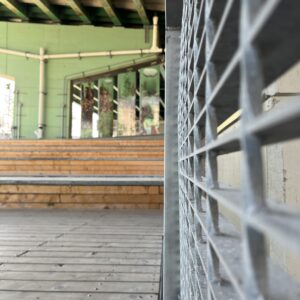 Chime calls from cascaded railings of the once-upon-a-time dock.  A distillate of chromatic sounds from inner piano strings that reveal a deep longing for the shoreline of the distant past. The lake leaves a fluid imprint acknowledged by the ears. 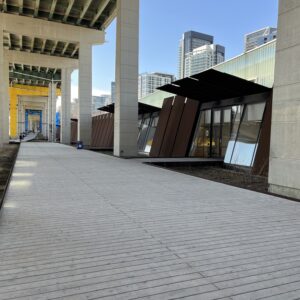 Water spouts activate the quiet intimacy of everyday objects, alongside a chorus of gurgles, sputters, and pitter patter. 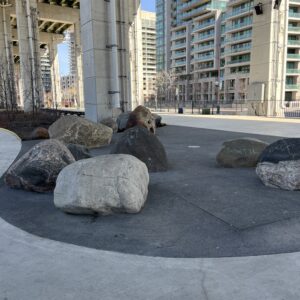 Cement framework, container of negative space, air passing through, revealed under the crumblings of saltworks. Metal conduit pipes hold a secret world of tones, textures, like the traffic, coming and going. 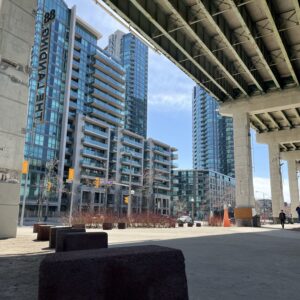 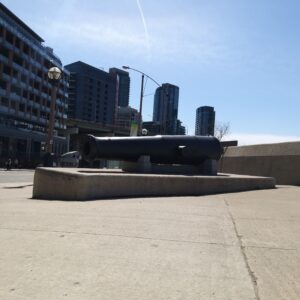 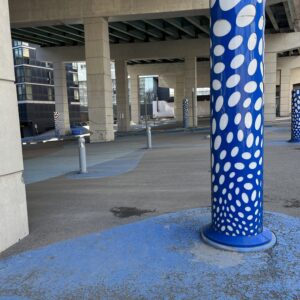 An everyday rock concert older than music for attentive ears and passers-by, honouring the sounds ranging from tiny raindrop-sized pebbles, to avocado-sized stones. Tapping, scraping, thumping over a bed of the swooshing expressive-expressway. 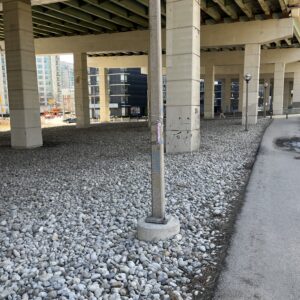 A gathering of different groups at play. A vibrant reflection of the sounds of community, intersecting rhythms of musical tag, hand clapping, basketball against pavement come together to paint a colourful sound parade. 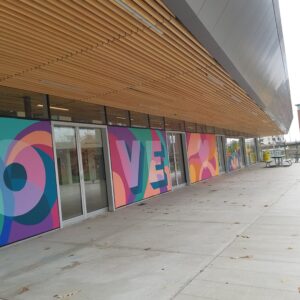 Germaine Liu (b. Hong Kong) is a scenario-maker and percussionist based in Tkaronto. Liu is interested in exploring and sharing things she finds joyful in collaborative settings, with hopes that participants are open and willing to participate. She loves tactile, movement, sonic, and physical explorations of found objects and percussion.

Liu is also a co-founder and co-curator along with Parmela Attariwala and Nicole Rampersaud for Understory, a web-based, inter-provincial series dedicated to showcasing improvising artists working across Canada, and to building a network between the artists and their audiences.

In addition to her interest in sounds/movement/touch, she also makes jewellery as handmade by germaine.

Mark Zurawinski is a Toronto-based percussionist, improviser, and sound designer with an eclectic palette, and fondness for left field music, which takes him to interesting and diverse sonic places – from contemplative chamber music to free-jazz freak outs, minimalist groove to digital noise. Mark is inspired by the tangibility of sound and has a keen interest in exploring the fluidity of texture and time, and the space where composition and improvisation meet.

A regular collaborator as a percussionist and sometimes band-leader in Toronto’s vibrant creative music scene, over the course of the pandemic Mark has been deepening his engagement with sound in the digital domain, focusing his attention on audio post-production and sound design for dance, theatre, and multimedia projects through collaborations with Understory, MOCA, UnDrum Festival, Indoor Jogging, Canadian Creative Music Network, and partner Germaine Liu.

Bea Labikova is a Slovak-Canadian saxophonist and improviser whose music traverses free improvisation, avant-garde, modern jazz and Slovak folk music. You can find her exploring and playing across genres as part of many new music ensembles and ad hoc projects (Future Proof, Lila Ensemble) as well as the avant-jazz group Triio or the contemporary afrobeat band Asiko Afrobeat Ensemble. In her solo project, Mt. Joy, Bea couples wind instruments with electronic processing, creating spacious sounds that reflect the arctic tundra where she travels regularly. Bea is the co-founder, visual artist, and one-half of the driving force behind the Women From Space Festival.

Aki Takahashi is a Japanese traditional shamisen player and folk singer. She studied traditional folk music in Kyoto, and has given shamisen and vocal performances at numerous venues and events. Since arriving in Canada, Aki has furthered her pursuit of traditional Japanese music with the addition of taiko drumming. Now Associate Artistic Director with pre-eminent Canadian taiko drumming group Nagata Shachu, and a shamisen and voice instructor at the Bachido Schoolhouse: International Shamisen Community online. She is also the founder of the Japanese folk ensemble “ten ten”, which has released four albums of original music and has performed with numerous artists from a variety of other cultural backgrounds and traditions.

Bee Pallomina is a dance artist living and working in Toronto/Tkaronto. Her practice includes movement, care, and the everyday. She is an artist, educator, and mom.

Brenda Joy Lem practices multiple artistic disciplines, including visual art, writing, taiko, and improvisational music, which support and broaden the possibilities of one another., and along with cooking, gardening and herbal medicine create a whole way of being.

Her solo shows include Museum London, The Richmond Art Gallery, The Robert McLaughlin Gallery, Museum of Chinese in the Americas in New York City, and the Mississauga Art Gallery.  Her films have played at TIFF, Ann Arbor FF, Images FF, and other North American Film Festivals.  Her works are included in the collections of the National Library of Canada, the Walter Phillips Gallery, Banff, the University of Michigan, and the San Francisco Art Institute, among others.  She has played taiko for over 35 years and is the artistic director of Inner Truth Taiko Dojo.

Fahmid Nibesh is a guitarist and audio technician who works with the guitar as a sound sculpture without overlooking its traditional functions. He has performed solo and in ensembles throughout Toronto’s improv scene since 2016. When he’s not playing, he’s busy diving into architectural acoustics and instrument construction as applied physics. Currently, he resides in Scarborough where he is studying Precision Building (Machining) at Seneca College

Canadian drummer and percussionist Joe Sorbara has spent more than two decades developing a reputation as an imaginative and dedicated performer, composer, improviser, organiser, writer, and educator. A consummate sonic adventurer, Sorbara’s music draws from a vast array of influences. He is equally comfortable playing jazz, freely improvised music, indie rock, and chamber music, but most at home playing them all at the same time. He has performed and recorded with Ken Aldcroft, Jared Burrows, Anthony Braxton, Nikita Carter, Paul Dutton, François Houle, Germaine Liu, Evan Parker, Allen Ravenstine, Clyde Reed, and Friendly Rich, among many many others.

Canadian vocalist and improviser, Laura Swankey is dedicated to exploring the full capacity of her voice. Her solo work with voice and electronics sets simple, earnest melodies and stories over top of lush soundscapes and bizarrely textured grooves. Sound that is ethereal and minimalist at some moments, can be dense, raw, and abrasive at others. Laura also creates and presents with Mike McCormick’s Proxemics, Elisa Thorn’s HUE, Jazz Bras Dot Com, Dr. Purgatory, and Plastic Babies. She teaches at the University of Toronto and Humber College in their respective contemporary music departments, and is currently completing a master’s in counselling psychology.

She leads and vocalises in Kontraband Kollektif, an art music collective, with its debut EP “Atropos” having been released in January 2018. Her voice can also be heard in multiple Toronto-based projects as well as Veryan Weston’s “Make”; soundtracks of movies “The VVitch”, “Clara”, Tumbbad, and “In the Tall Grass” and various Tanya Tagaq shows with Christine Duncan’s Element Choir.

Michelangelo Iaffaldano lives and works in Toronto. He is active in drawing, painting, puppetry, theatre, and in both traditional and experimental music as a singer, multi-instrumentalist, composer, and instrument inventor.

Beijing-birthed, Toronto/LA-dwelling vocalist-composer-improviser Mingjia writes music that’s equal parts fantastical and relatable. She is mother to chamber ensemble Tortoise Orchestra, and synth-pop duo uoou. She also composes for and is a member of both the post-punk band Pleasure Craft and GRAMMY award-winning vocal ensemble Roomful of Teeth. She has made music with Pamela Z, Wild Up Ensemble, GREX, Andrew Yee (of Attacca Quartet), James Fernando, the science of what?, Juliet Palmer, Christine Duncan, and many more. She has performed at various venues and festivals across Canada, China & the U.S, and has produced four releases as a bandleader.

Stephanie Chua is an expressive and versatile Canadian pianist, devoted to presenting and performing contemporary works through musical insight and innovative programming. She has been broadcasted across Canada on CBC Radio 2, and in Europe on Rondo Classic FM. She has also performed in solo and chamber recitals across Canada, Europe and Asia. Her recent highlights include being a featured performer in Soundstreams’ sold-out season opener Six Pianos at Koerner Hall in Toronto, and solo recitals at SOUL Live Music Project in Ho Chi Minh City in Vietnam in partnership with Saigon Classical, New Music Edmonton, and Music Toronto’s Discovery Series.

Raphael Roter is a percussionist based out of Toronto who specialises in music for contemporary dance, free-improvisation, and afrobeat. He has composed music for  Sahara Morimoto, Aeris Körper,  Morgan Stasiewicz, and The Toronto Music Gallery. He plays drums with the afrobeat band Asiko Afrobeat Ensemble, with the avant groove band Future Proof and with the progressive folk band Alluvial Plain. He has played and recorded with Doug Tielli, Adam Rudolf, Meliani Brulee, Trisha Foster, and Aline Morales, among others Raphael also works as a dance accompanist and is the curator for the monthly music and dance improvisation event Coexisdance.

Heather Saumer is an improviser, composer, collaborator, trombonist, singer, mover, thinker, walker, and noticer of subtle things. She loves performing and collaborating within and between the realms of open improvisation, new/contemporary music, performance art / site-specific installations, jazz, folk, rock, pop, and in collaboration with movement and visual art forms. She teaches in her private studio, and leads workshops and clinics. She is a certified Tuning Fork Therapist, Yoga Nidra instructor, is studying Gestalt psychotherapy, and lives off-grid in rural Ontario.

A musical chameleon, Christine Duncan uses her voice as an instrument, in a wide range of diverse musical styles. She performs with many musical groups and projects, notably with Hugh Fraser’s VEJI (Vancouver Ensemble of Jazz Improvisation) since the mid 1990’s, and Barnyard Drama with drummer/electronic artist Jean Martin, since 2002, and is part of the Barnyard Records family.

She created and directs the Element Choir, an improvising choir in Toronto, active since 2007. Christine and the Element Choir have been performing with inuit throat singer/experimental vocalist Tanya Tagaq since 2014, and she performs with Tagaq on voice and theremin as well. An active educator, Duncan has been teaching in the jazz programs at Humber College and the University of Toronto since 2003.

And With – Meet Us and Play The Bentway!